School Is in Session; Time to Talk about School Bus Safety

Home/Bus Accident/School Is in Session; Time to Talk about School Bus Safety

School Is in Session; Time to Talk about School Bus Safety 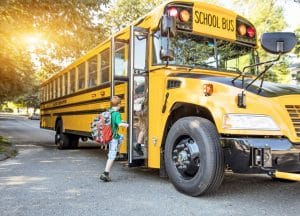 Parents can control the cars they drive. They rely on the school system and the school bus driver to be properly licensed and trained to drive their children. The good news, according to the National Highway Traffic Safety Administration (NHTSA) is that children are 70 times more likely to get to school safely if they’re in a bus than in a car. Still, accidents do happen on the way to school or on the way to extra-curricular events. When school bus accidents do happen, multiple children are likely to be injured.

According to another NHTSA report, 1,282 people were killed in school-transportation related accidents between 2007 and 2016. Nine percent involved the occupants of the bus. Bicyclists and pedestrians accounted for 20% of the fatalities. Nearly 70% of those who died were occupants of other vehicles.

Buses, according to the NHTSA, are safe because they are designed to be highly visible and have many safety features such as stop-sign arms, cross-view mirrors, and flashing red lights. They are also generally designed with rollover protection features and standards to manage crushes. When a bus and a car collide, it is normally the car which suffers the bulk of any damage.

State laws also protect children by making it a priority of other drivers to protect children. For example, it’s generally illegal to pass a school bus while it is picking up or driving passengers.

How children on buses can be injured

If a bus does rollover, the lives of all the children in the bus are endangered. If the driver speeds, runs through a stop sign, or is negligent in any way, then the children on the bus can be hurt.

Many injuries happen as children are getting on the bus or getting off the bus. Younger children are especially like to run into traffic. Even when children are careful to look both ways, a distracted driver can come out of nowhere. Sometimes, the bus driver may resume driving without realizing there is child in his/her path. Parents who wait with their children and older children should make sure the bus is completely stopped before getting on or off. Children should never walk in front of or behind the bus. Instead, they should wait for the bus to pass before crossing the street.

There’s always a risk that children can be injured through the play of the other children on the bus, too.

Why don’t all school buses have seat belts?

While school buses generally don’t have seatbelts, they are designed to help soften the blow of any crush. NHTSA calls this concept “compartmentalization.” The seats are built with metal and padding to absorb the energy of a crash. The seats are also designed to limit how far a child can move in the event of a head-on and rear-end crash. The bigger danger for children on a bus is that they might be thrown from side to side. Some states are now requiring that new buses have “three-point safety belts,” which help to secure the child’s hips and shoulders in the event of a bus accident.

The NHTSA recommends these school bus safety tips for children:

The NHTSA recommendations for drivers are:

Parents, especially for younger children, should wait and supervise their child at the bus stop. They should let the children know it’s better to lose or forget something, like a jacket or school bag, then to risk their lives trying to retrieve the lost item.

If a child is injured or tragically killed while waiting at a bus stop or while riding on the bus, our experienced Mississippi school bus accident lawyers have the experience and resources to help you get justice. To schedule an appointment, call Merkel & Cocke, P.A. at 662-627-9641 or complete our contact form. We represent any child and their parents when accidents happen in Mississippi, including in Jackson, Clarksdale, Oxford, Tupelo and the Gulf Coast Region.