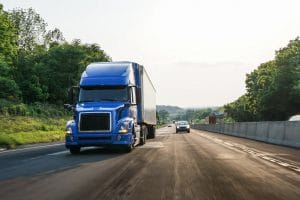 Charlie Merkel and Ted Connell represented a client from Helena, AR, in a truck accident claim. She was 46-years-old at the time of the collision, was a stay-at-home mom, and home-schooled her three children. Her husband was the local State Farm agent.

The family had a condo in Orange Beach. She was traveling down to meet her son, who worked at the local wharf there, when she was going to pull into the Exxon gas station on Highway 63, just south of I-10 in Moss Point. Our client said she was sitting in the turn lane waiting for the light to turn when she saw an 18-wheeler coming up behind her. She did not think anything of it and began to slowly make her turn. As she was doing so, the 18-wheeler attempted to make a right turn as well, but cut it too short. When he did so, the back end of his trailer picked up her car and dropped it.

The truck driver claimed that he was first in line in the turn lane, was making his right turn, and our client either did not see him and ran into the side of him or was attempting to pass him on the shoulder.

Our client had a torn rotator cuff tear that led to surgery, had a double disk fusion and a disk replacement (two surgeries), was diagnosed with occipital neuralgia (which are really bad headaches), and had approximately $359,000 in medical bills. We had expert medical testimony that she would need expensive shots going forward to treat her headaches.

Before proceeding to trial, we attempted to mediate a settlement on behalf of our client. At mediation, the defense offered our client $170,000, and we countered with $800,000. No other offers were made before going to trial.

The defense claimed our client did not immediately complain of these serious injuries until two months after the accident. We responded to this with the fact that she had a low back surgery with hardware in the past, and that was her concern. We took three of her doctors’ depositions, all of whom sided with our client.

The star witness for the defense eventually agreed with us

The driver lied about a speeding ticket during his testimony

The truck driver who hit our client was not present at the trial. He had testified earlier that he had been in South Florida at his home for four days, and was traveling to California with a load of orange juice on the day of the accident. He testified he spent the night in Pensacola and had been on the road a couple of hours before the accident. He also testified that he had no prior speeding tickets or any violations whatsoever. However, during our investigation, we discovered that the driver had been ticketed for speeding in New Mexico 48 hours prior to this accident. We decided that, under Rule 806, we could disclose the ticket after his deposition was read at trial. The judge reviewed the evidence in her chambers and then allowed it to be introduced.

Charlie Merkel at his finest

Charlie Merkel led with the ticket in his closing, and absolutely hammered the opposing counsel’s expert medical witness as well for not even considering the two most important records, despite being paid to do exactly that. There were several lawyers in the courtroom, and all agreed that Charlie Merkel gave a master class in closing arguments that day.

The jury was out about 2.5 hours before awarding our client $1 million for economic losses, and $500,000 for pain and suffering.

The trucking company almost put our client in the grave. She had a husband and son that propped her up to keep her going, and we are glad that she had such a strong support system. We are also grateful that the jury saw the truth, and that justice was served for our client.