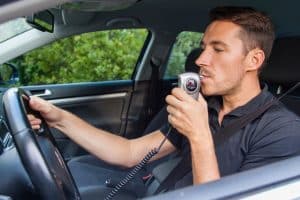 It has been mentioned before that anti-drunk driving technology could soon be implemented in cars—but it could be even closer than we think. A provision in last year’s proposed Surface Transportation Act would require all new vehicles to come standard with technology that prevents a car from operating if the driver is intoxicated. At the time, it was unclear what this technology would look like. However, details are starting to become more apparent as more eyes are focusing on the idea.

An alcohol detection system is being researched with the help of the Automotive Coalition for Traffic Safety and the National Highway Traffic Safety Administration (NHTSA). Together, they created the Driver Alcohol Detection System for Safety Research Program which has been exploring different ways of how this system could work. As of right now, they have come up with two different approaches:

If a driver is found to be intoxicated by being over the legal limit of 0.08 percent, then the alcohol detection system will simply not allow the car to move. Both options will be explored further to find which would be the better, more effective choice. Researchers also say that it will eventually become a safety option in all new vehicles, just like automatic braking and lane departure warnings.

Latest push comes after a “decade of inaction”

The idea of some type of anti-drunk driving device being installed in cars is not all that new. However, per a piece in Ars Technica, this is the first time that the National Transportation Safety Board (NTSB) has spoken up about it. They published a press release recently to draw more attention to the subject, since alcohol-related fatal car crashes have not seen any kind of downward trend in some time. While the NTSB cannot implement this regulation on their own, they used their public platform to urge the NHTSA to do better, stating they believe the industry is moving too slowly on such a deadly issue.

Under the Infrastructure Investment and Jobs Act, signed into law in 2021, the NHTSA must issue a rule by November of 2024 “that requires passenger motor vehicles manufactured after the effective date of that standard to be equipped with advanced drunk and impaired driving prevention technology.” Car manufacturers must comply within three years.

It makes sense the NTSB is up in arms about no one taking control of these very preventable deaths. In fact, the NHTSA reports that about 32 people per day are killed in drunk driving accidents. More, accidents involving alcohol impairment make up nearly one-third of all traffic fatalities in the United States. These accidents have also risen by 14% from 2019 to 2020.

It is not just those drivers who are over the legal limit, either. In 2020, over 2,000 people were killed in alcohol-related crashes where the driver had a blood alcohol level of anywhere between 0.01 and 0.07 percent. While this alcohol detection system will not be flawless and catch those who technically did not have too much to drink, it very well could save thousands of lives by stopping those over the legal limit.

Blood alcohol concentration affects more than you may realize

Some people may think that they are perfectly fine to drive after just a couple of drinks because they do not “feel” anything. However, they may not technically be over the legal limit, but the alcohol does affect them more than they may realize. From just a couple of drinks to the more extreme, these are a few ways in which alcohol can impair your ability to drive:

If you or a loved one was hurt or killed in a Mississippi drunk driving accident, then it is your right to seek compensation for your pain, suffering, and financial loss. But your claim could be tricky to tackle alone. Make sure to talk to an experienced Mississippi car accident attorney to help you fight for the compensation you deserve.

The experienced injury attorneys at Merkel & Cocke, P.A., fight for our clients who are harmed by drunk drivers in Mississippi. Call our office at 662-627-9641, or complete our contact form to schedule a free consultation. We operate offices in Jackson, Clarksdale, Greenville and Oxford to better serve you.