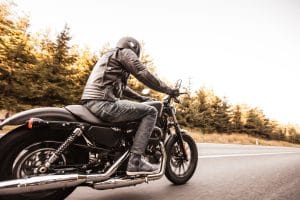 Sometimes, a fun activity can be a risky one. Driving a motorcycle is one of those activities. Driving in general is a calculated risk we all make the choice to take, but after a while of safe driving and no accidents, we become acclimated to a false sense of security, and we become more relaxed behind the wheel, oftentimes making us less cautious when driving. It’s during those moments that we are most vulnerable to a crash, and none more so than motorcyclists.

A motorcyclist does not have the same shell of protection that a regular sedan vehicle, so it’s important that the driver uses the proper protective gear when driving, especially a helmet. “Helmets saved the lives of 1,872 motorcyclists in 2017,” the National Highway Traffic Safety Administration states; “helmets are estimated to be 37-percent effective in preventing fatalities to motorcycle riders and 41 percent for motorcycle passengers.” While some people find helmets to be restrictive or an annoyance, it’s obvious how helpful they are at saving lives and protecting the drivers and riders of the motorcycle.

What happens when you don’t wear a helmet?

One of the greatest risks to driving a motorcycle is ending up in a crash where your head is damaged. Your head (and the brain in it) is one of the most vulnerable (if not the MOST vulnerable) areas of your body, and driving on the road in a motorcycle is a great way to put it in danger. In order to truly understand the risk you’re putting yourself in, we should understand what happens when your brain IS injured in a crash while on a motorcycle, presuming you aren’t wearing a helmet.

One brain injury you might receive in a motorcycle crash is a concussion. While on the milder side of brain injuries, it is still serious and can cause severe harm if left untreated. A concussion usually happens from a sudden jolt or hit to the head, and can cause severe headaches, temporary amnesia, and nausea. A more serious concussion may result in worse symptoms like long term memory loss and unconsciousness, as well as other cognitive complications.

Another brain injury you may sustain if involved in a motorcycle accident is a contusion. A contusion is a bruising or bleeding of the brain caused by an injury to the head. The symptoms of a contusion are similar to that of a concussion with symptoms such as confusion, headaches, and dizziness, along with the more severe signs such as seizures and lasting coordination issues.

Wearing a helmet can save you from a lot of pain and suffering. Protect your head when you’re out for a ride on the road in a motorcycle.

What are the effects of a brain injury from a Mississippi motorcycle accident?

If a rider isn’t wearing a helmet, the risk of a serious brain injury is significantly increased. The effects of a brain injury will depend on the severity of that injury, which means you may face:

In some cases, a victim may end up in a coma or in a vegetative state, either temporarily or permanently.

When an injury is this severe, it takes a considerable amount of medical care to treat. Some motorcycle accident victims may never fully heal. As a result, families may suffer devastating financial setbacks, as they will have significant medical bills.

What are the causes of motorcycle accidents?

When out on the road, what should motorcyclists be concerned and cautious about? There are several main causes of motorcycle accidents that lead to brain injuries:

Brain injuries are nothing to ignore. It’s vital to protect your head when you go out for a ride, whether on the highway or on back roads. Refusing to wear such protective gear may have you ending up in the hospital with a concussion, contusion, or even a penetrating brain injury. It’s better to drive safely (if slower), than to wind up with no memory and severe headaches for the rest of your life. If you’ve suffered from a brain injury due to a motorcycle accident in Mississippi, it’s time to call Merkel & Cocke, P.A. at 662-627-9641, or fill out our contact form to make an appointment at one of our offices in Jackson, Clarksdale, Greenville, or Oxford.