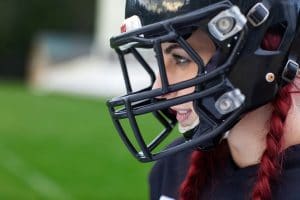 As women’s sports steal more of the spotlight, especially during the most recent Olympics, more female athletes are sharing their experiences of dealing with traumatic brain injuries. One of athlete brave enough to share her struggle is Sue Lopez, the first semi-professional female football player in the 1970s, who now lives with dementia as a result of the recurring concussions she suffered while playing the sport.

The injuries that Sue Lopez sustained are not an isolated event; research indicates that female athletes are at a significantly greater risk of obtaining a traumatic brain injury than male athletes. Female athletes were also discovered to have fared worse after a concussion and take a longer amount of time to recover. While head injuries have been a hot topic for many years, researchers are offering explanations as to why female athletes have a greater risk for brain injuries.

Brain injuries can occur from severe incidents such as motor vehicle accidents, child abuse, and acts of violence; they can also occur from recreational activity such as sports. An estimated 1.7 to 3.8 million traumatic brain injuries occur in the United States each year, and sports and recreational activities account for 10 percent of those traumatic brain injuries. Most athletes accept the risk of potentially suffering from a head injury when engaged in a particular sport; however, even mild brain injuries received from a sport can lead to permanent damage and disability.

What are the symptoms of a traumatic brain injury?

A traumatic brain injury can occur when the head violently comes in contact with an object, or when an object pierces through the skull and damages brain tissue. Depending on the type and nature of the damage done to the brain, a person can experience mild to moderate to severe symptoms of a brain injury.

Mild TBIs cause a person to experience a brief change in their mental state, while moderate or severe TBIs can cause a person to experience extensive periods of unconsciousness, coma, or even death. Some symptoms of a TBI include problems with motor functions, constant headaches, hypersensitivity to light or sound, a shortened attention span, agitation, and slurred speech.

What types of TBIs are sustained in sports?

One of the most common types of TBIs sustained in sports is concussions. A person can experience a concussion when the brain is shaken hard enough to bounce against the skull. Although concussions are classified as a mild TBI, it is one of those TBIs that can gradually turn severe. Once an athlete sustains a concussion, he or she is at a greater risk of enduring additional concussions. An athlete who experiences frequent concussions can suffer from long-term conditions such as chronic traumatic encephalopathy (CTE) or dementia.

When it comes to playing sports, concussions can be caused by either an immediate blow to the head, face, or elsewhere on the body followed by an impulsive force transmitted to the head. Although athletes may experience a short period of dizziness or unconsciousness, there are some occasions where the symptoms worsen hours or even minutes later.

The next common brain injury that can be caused from contact in sports is a subdural hematoma. This is a serious brain injury that is caused by a traumatic blow to the head during practice or recreational activity. Athletes who participate in contact sports such as football, mixed martial arts, boxing, and rugby are at greater risk of enduring a subdural hematoma injury.

An athlete that continues to suffer constant concussions from playing contact sports is at risk of sustaining  CTE. Chronic traumatic encephalopathy (CTE) is a progressive brain injury that occurs as a result of repeated blows to the head. This type of brain injury is associated with dementia. Although certain knowledge of CTE such as causes, symptoms, and risk factors are still ongoing, this type of brain injury has been affiliated with memory problems, confusion, changes in personality, and erratic behavior. People who suffer from CTE may also experience symptoms such as problems with motor functions and issues with organizing thoughts and paying attention.

What sports produce the most TBIs?

Were you injured in a sports accident that caused a brain injury? Did a loved one suffer paralysis or another life-altering brain injury in a sports accident? Call the office of Merkel & Cocke, P.A. at 662-627-9641, or complete a contact form to schedule a consultation with a member of our team. We serve clients in Jackson, Clarksdale, Greenville, Oxford, Tupelo and the Gulf Coast region.

For more than 40 years, Mr. Merkel has personally delivered more than 400 jury presentations in the representation of personal injury victims whose cases involved complex medical and technical injury mechanisms and causation problems. After graduating magna cum laude from the University of Mississippi School of Law in June 1966,   Mr. Merkel has received multiple jury awards ranging from $1 million to $20 million, and many more million-dollar settlements. He is active in trial lawyer activities and is a frequent lecturer on trial technique and advocacy, appearing at seminars sponsored by the Mississippi State Bar, Mississippi Association for Justice, American Board of Trial Advocates, and others. Learn more about Charles M. Merkel Jr.