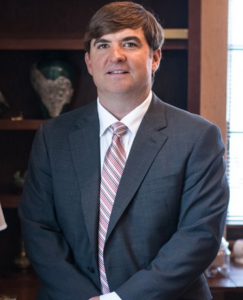 Merkel & Cocke, P.A. is proud to announce that Charles M. Merkel, III is in very select company. He is only one of 5 distinguished attorneys listed by 2019 MidSouth Super Lawyers in the practice area of Personal Injury Medical Malpractice – Plaintiffs who practices law between Jackson and Memphis. This is Mr. Merkel’s fourth consecutive year being named to MidSouth Super Lawyers. He has previously been recognized by Super Lawyers Rising Stars.

Upon his graduation from the University of Mississippi, Charles Merkel, III secured the distinguished position as a U.S. District Court judicial law clerk in the Southern District of Mississippi, Jackson Division. In 2002, he joined Merkel & Cocke, P.A. where he currently serves injured clients in cases involving medical malpractice, defective products, and other negligence.

Although Mr. Merkel’s legal practice includes a wide swath of malpractice and injury law, he has a special interest and focus on chiropractic malpractice in products liability claims. He is licensed and available to practice before all federal and state courts in Mississippi, including the Fifth District U.S. Court of Appeals.

Some of Mr. Merkel’s awards include:

Since starting his law career, Mr. Merkel has been recognized by clients and peers alike for his dedication to his clients and commitment to upholding the highest ethical standards in his practice.

We are proud of Charles’ latest recognition by Super Lawyers and invite you to join us in wishing him congratulations!