How Can a Car Accident Lead To a TBI?

Home/Brain Injury/How Can a Car Accident Lead To a TBI?

How Can a Car Accident Lead To a TBI? 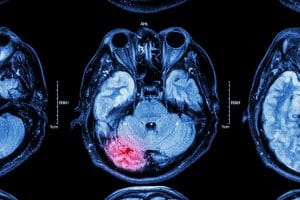 Traumatic brain injuries from a car crash can, according to Brainline.org, cause bleeding and loss of oxygen in the brain. The skull may fracture. Brain tissue may be bruised. Many victims often suffer physically, emotionally, and cognitively for the rest of their lives. It’s fairly common for victims of severe TBIs to treat with many different doctors and therapists.

When a car crash happens, the drivers or passengers can strike their head against various objects that can create a violent force against the skull and the brain. Many times, that includes:

The severity of a TBI usually increases with the force of the impact. Cars travelling at higher speeds are more likely to cause a TBI than cars going at lower speeds. People in smaller cars are more likely to suffer a TBI if their car crashes into a bigger vehicle or a truck than occupants of larger cars. The crashworthiness of the car is also a factor.

People who suffer a TBI due to a car crash often suffer other severe injuries such as spinal cord damage and broken bones.

Many car accident TBIs are due to the violent forces of the accident, as opposed to a physical blow to the head. The crash, even when the driver or passenger is contained in their seat, can cause their head to move back and forth multiple times at high accelerations and decelerations. These movements can cause the brain to move about in the skull causing a car accident TBI. Essentially, even though the car stops due to impact, the brain keeps moving at the speed of the vehicle before the crash.

Direct hit TBIS and most indirect TBIs are due to trauma that occurs at the time of impact. A more recent form of TBI that has been identified is a secondary traumatic brain injury. In a secondary TBI, the trauma can occur hours, days, or weeks after the initial impact. This is why it’s important to monitor anyone with a TBI due to a car crash because the symptoms can worsen with time if not treated promptly.

At Merkel & Cocke, P.A., our Mississippi TBI lawyers work with neurosurgeons and other professionals to fully understand your medical diagnosis, your future medical needs, the type of care you will need for the rest of your life, and the pain and anguish that you will endure on a daily basis. We work with you and your families to hold negligent drivers and owners responsible as well as any manufacturers if a product defect caused the crash.

If you or a loved one suffer a TBI due to a car crash in Mississippi, call Merkel & Cocke, P.A. at 662-627-9641 or complete our contact form to schedule an appointment at an office in Jackson, Clarksdale, or Oxford.