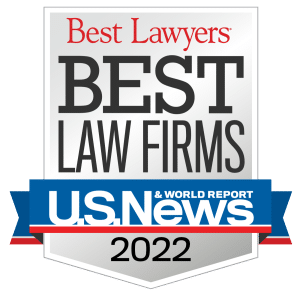 Merkel & Cocke, P.A. is proud to announce that the Firm has once again been named to Best Law Firms. We have retained our Tier 1 ranking in the Memphis region in four different areas of practice:

It is an honor to be recognized by our peers each year for our work. Selection to Best Law Firms is contingent on at least one attorney from the Firm being selected for Best Lawyers. You cannot purchase a spot on the list, nor does inclusion one year guarantee selection the next year.

This year, four partners at Merkel & Cocke, P.A. were selected for inclusion in Best Lawyers for 2022:

Charles M. “Charlie” Merkel, Jr. has been recognized by Best Lawyers for 32 consecutive years. He was named a Lawyer of the Year in 2010 and 2012. He has also been recognized by Super Lawyers since 2006 and been named to both the Top 50 in Memphis and Top 100 in Mississippi. He is rated AV Preeminent by Martindale Hubbell and was invited to join the American Board of Trial Advocates in 1993. He served as ABOTA President twice (1989-1990, and 2009-2010).

Edward “Ted” Connell, Jr. was recognized by Best Lawyers for the first time this year. He has been named to Super Lawyers and Super Lawyers Rising Stars since 2008, to The National Trial Lawyers: Top 25 Workers’ Compensation Trial Lawyers Association.

All of us at Merkel & Cocke, P.A. are immensely proud of the work we do on behalf of our clients every day, and we are honored to be recognized by our peers in this way.