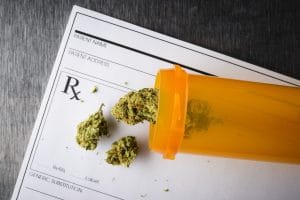 The law, effective February 2, 2022, permits patients who have any of the following medical conditions to use marijuana to treat their disorder:

CNN reported that patients must receive authorization from a qualified medical practitioner. The practitioner must conduct an in-person examination of the patient (not a telehealth exam). The patient must obtain a registry identification care form from the state Department of Health. The cannabis can’t be distributed within 1,000 feet of schools, childcare facilities, or churches, unless they obtain a waiver.

The statute defines qualified medical practitioners as “a physician, certified nurse practitioner, physician assistant or optometrist who is licensed to prescribe medicine under the licensing requirements of their respective occupational boards and the laws of this state.” These practitioners can prescribe up to three ounces of marijuana each month.

Employers will generally still be allowed to consider an applicant’s or employee’s use of drugs – including medical marijuana – when making employment-related decisions.

What happens if I’m injured in a car accident with a drugged driver?

How does marijuana use affect driving?

According to the National Institute on Drug Abuse, “marijuana significantly impairs judgment, motor coordination, and reaction time, and studies have found a direct relationship between blood THC concentration and impaired driving ability.” Most vehicle accidents where a drug is found in the driver’s bloodstream involve marijuana.

Marijuana makes drivers less able to react to emergency situations. If, for example, a deer or a child darts into a roadway, or another car swerves into a lane to avoid a collision, a driver impaired by weed may not be able to avoid a crash. If the driver is behind the wheel of a multi-ton 18-wheeler, the consequences can be devastating.

It is worth noting, though, that today’s medical marijuana is nothing like the banned drug from even five years ago, let alone 10 or 20. Medical marijuana has been tailored to address symptoms for a wide array of conditions, and it can act as a stimulant, a depressant or a hallucinogen. It is also much, much stronger. With so many strains, it is virtually impossible to determine how medical marijuana will affect any given user, whether he or she is driving a car or not.

How is driver impairment determined in Mississippi?

Generally, when there’s an accident, the police are called to the scene of the accident. They’ll then investigate the accident. If they have reasonable grounds to believe a driver was under the influence of marijuana (whether it is approved medical marijuana, an approved prescribed drug, or an illegal drug), the officer will normally ask the driver to submit to specific tests to determine the driver’s ability to concentrate, keep their balance, and other tests. The officer may also request that the driver submit to a blood test.

Should I hire a personal injury lawyer if I’m hit by a drugged driver?

If a car, truck, or any other type of vehicle accident was caused by a driver who was under the influence of drugs or alcohol, you should consider working with an attorney. If the case involved medical marijuana, it may be even more critical that you seek help.

If the government files criminal charges against an impaired driver, then the criminal case is usually tried or resolved before your civil case. We may be able to use the conviction in a criminal case to prove the defendant caused your accident. We usually can use the evidence that the driver was under the influence of drugs such as marijuana.

Even if there is no criminal case, victims and families can still file a civil personal injury case against the driver. We work with investigators, the police, and your doctors to show how the accident occurred and who is responsible. Drivers who are under the influence of marijuana are often negligent for other reasons too. Some of the reasons include speeding, going through a red light, driving while tired, or driving while distracted.

If the owners of the vehicle are different than the driver, then the owners may be liable too. For example, if a teenager uses his parents’ car and then gets high, the parents can be held liable for an accident that the teenager causes.

How much is my car accident case worth if it was caused by a drugged driver?

Anyone who suffers injuries in a crash may be entitled to the following damages from the liable drivers:

If a driver operated his/her vehicle while they were impaired, we also usually file a claim for punitive damages.

If a loved one died, we file a wrongful death claim on behalf of the family.

Speak with an experienced Mississippi car accident lawyer today if your injuries are due to a drugged driver. At Merkel & Cocke, P.A., our lawyers have a strong track record of successfully settling personal injury cases and trying personal injury cases before juries. To schedule an appointment, call us at 662-627-9641 or complete our contact form. We represent accident victims and families in Clarksdale, Jackson, Oxford, and Greenville, and throughout the state, including in Tupelo and the Delta Region.