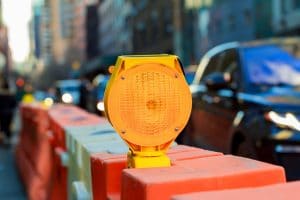 When you’re driving on the highway, having found your speed sweet spot, perhaps enjoying your favorite music, it perhaps comes as a bit of a disappointment and annoyance when you see those “Road Work Ahead” signs in the distance. But it IS important to slow down and drive cautiously. Thousands of Americans put their lives at risk fixing our nation’s roads and highways, working close to fast traveling and congested traffic. Every year, there are injuries and deaths that are easily preventable if only the drivers on the road took those orange caution signs seriously.

According to Work Zone Safety, in 2019 there were 762 work zone accidents and 842 work zone fatalities, both up from their previous three year average. Among those fatalities, 135 of those were workers. It’s critical that when we’re on the road, behind the wheel, that we take care to be cautious of those on the road be they workers or pedestrians. “Approximately 38 percent of pedestrian fatalities in work zones each year are actually roadway workers who are struck and killed by vehicles. Also, in some cases the driver of the vehicle, rather than the pedestrian involved, was the person killed.”

What are some of the causes of work zone crashes?

It’s easy to “zone out” on the road, especially when we’ve been driving for a while at a time, but that causes us to become less alert to the changes that are happening around us. This is one of the main reasons for work zone crashes. You can’t avoid what you do not notice. Other causes for these sorts of crashes include:

The Mississippi Department of Transportation District Engineer Brian Ratliff told WLBT News 3, “We see distracted driving all the time and it’s getting worse and worse each day. Distracted driving is one [cause], speeding is one. This night work [where] we’ve seen alcohol-related crashes out there that we gotta deal with. We deal with a lot of different issues that cause accidents out there.”

How to prevent and avoid work zone crashes

First, you’ll want to stay alert and minimize distractions. The road is a dangerous place, not to mention a literal work zone for about 75% of Mississippi’s Department of Transportation, per WLBT. Focus all of your attention on the road, and avoid changing the radio station, eating or drinking, using your phone, and anything else that might draw your attention from the road and the changes happening there.

As you’re paying attention to the road, keep an eye on the cars around and in front of you. Make sure you watch for brake lights and any deviation from the vehicles around you so you can be swift to react. Also, make sure your headlights are on. It’s important for the drivers around you to see you, as well as those workers on the road.

If you’re merging, make sure to follow the flow of traffic. Don’t hold everyone up, or merge at the very end of a lane closure. Try to merge far before the lane is closed. If you are used to a certain pattern of traffic every day, don’t assume it’ll be the same that day.

When stuck in traffic in a work zone, don’t tailgate. This is a surefire way to end up in a rear-end collision. Follow the vehicle in front of you at a safe distance, with at least a full car’s length of space between you.

As much as it’s difficult to do, expect the unexpected. This means driving cautiously and keeping your attention focused. Workers and their equipment or vehicles may be in your lane without warning. The cars around you may stop or change lanes suddenly, and while on occasion you may have the right of way, you still don’t want to end up in an accident even if it’s not your fault.

Entering a work zone may be a hassle, but it’s a necessary part of driving if you are often on the road. It’s important to drive carefully and to follow the warning signs on the road. If you don’t, you may end up hitting a worker, or in a crash with another car. Be careful of other driver’s as well – they might be the ones who are distracted or speeding. However, if you do end up in a crash in a work zone in Mississippi, you’ll want to contact Merkel & Cocke, P.A. at 662-627-9641, or fill out our contact form to make an appointment at one of our offices in Jackson, Clarksdale, Greenville, or Oxford.

Charles M. Merkel, III attended the University of Mississippi for his undergraduate and law degrees, graduating with honors from both. Upon graduation, he received the coveted position as a judicial law clerk for US District Court for the Southern District of Mississippi, Jackson Division. Mr. Merkel joined Merkel & Cocke, P.A. in 2002, where he works with clients who have sustained serious injuries because of negligence, medical malpractice and defective products. He has received many honors, included being cited by Super Lawyers, National Academy of Personal Injury Attorneys, and Best Lawyers in America. Learn more about Charles M. Merkel, III.