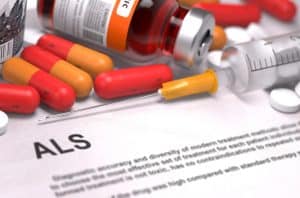 Remember when all of social media was filled with people “competing” in the Ice Bucket Challenge? If not, the gist of it was this: someone tagged you in a post on social media that challenged you to donate to an ALS foundation, or dump a bucket of cold, ice water on your head. There was a lot of chatter about that challenge at the time, but something good may have come out of it.

The ALS Association announced not too long ago that the Ice Bucket Challenge partially funded the research behind Relyvrio, a new treatment option for people with ALS. It is an oral medication that those suffering with ALS can take to prolong the disease progression.

Relyvrio is designed to slow the disease, which could give those with ALS a longer life expectancy. The oral drug, in a powder form, is said to protect the nerve cells in the brain and spinal cord that ALS typically destroys. Researchers presented evidence from the drug trial to the U.S. Food and Drug Administration (FDA) where the organization determined there was solid proof that the drug is effective.

In their 24-week trial, those who received Relyvrio showed a 25% slower rate of decline compared to those who were given a placebo. They tested this by how well patients were able to walk, talk, and cut food. At the moment, researchers are saying using this drug could prolong a patient’s life by about 10 months. Although this does not seem like a lot of time, those extra 10 months are invaluable. Those suffering from the disease would be able to maintain a relatively regular life for longer and their families get to spend more time with their loved one.

As exciting as this all seems, Relyvrio is not out of the woods quite yet. The FDA did see the evidence and approve the drug since there currently are so few options to slow down or cure the disease, but more testing does need to be done. Once their Phase III trial concludes sometime in 2024, the research will be re-examined to determine if this drug is still in fact effective at prolonging the progression of ALS.

Amyotrophic lateral sclerosis is a neurological disease. It can be hereditary, but its causes are not fully understood or known. It affects the nerve cells that control all voluntary movement, like walking and talking. Once diagnosed, it is typically a rapidly progressing disease that deteriorates the motor neurons that send the signals to the brain. Once those neurons are damaged, these messages cannot be sent, preventing the muscles from functioning. ALS is sometimes referred to as “Lou Gehrig’s disease,” after a famous baseball player in the late 1930s who passed away from the condition within just a couple years of is diagnosis.

What are the symptoms of ALS?

Watching a loved one suffer from ALS is tragic. Knowing that there is essentially nothing you can do to combat the disease is heartbreaking. With it rapidly taking over their body, it can be painful to watch as the symptoms worsen, like:

Even though the FDA did approve Relyvrio for the market, it is still an experimental drug. And experimental drugs always pose risks. That means that not all of the side effects have been determined and it potentially may not even be effective. It is completely understandable if you or your loved one wants to try Relyvrio in order to decelerate ALS’s advancement, but you should always keep those risks in mind. Plus, it can be hard to file a defective drug claim in Mississippi while a medication is still in trial testing.

If you or a loved one was injured or killed by a defective drug, then it is your right to seek compensation for your pain, suffering, and financial loss. But your claim could be tricky to tackle alone. Make sure to talk to an experienced Mississippi product liability attorney to help you fight for the compensation you deserve.

Merkel & Cocke, P.A., represents victims of defective drugs throughout Mississippi. If you or a loved one has suffered an injury because of a defective drug, complete our contact form, or call our office at 662-627-9641 to schedule a free consultation. We operate offices in Jackson, Clarksdale, Greenville and Oxford to better serve you.