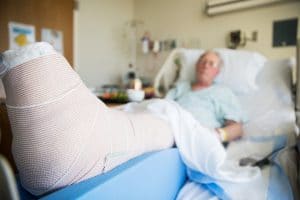 The older population has historically been at an increased risk of dying after suffering a hip fracture or other vertebra fracture. This is often associated with complications that can occur while the person is immobilized during the recovery process.

New findings have discovered that people ages 50 and older can have an increased risk of death of up to 25 percent after suffering other types of fractures. The study was conducted in Denmark and was reported in the Journal of Clinical Endocrinology & Metabolism.

How dangerous are broken bones?

Depending on various factors, a broken bone is not typically a cause for concern. You may be in a cast for some time and have discomfort but then return to your day-to-day life. However, in the older population there a broken bone is a much more severe health issue. A more senior person who suffers from a broken bone may have an increased chance of death during the first year and can still be prevalent ten years after the injury.

Researchers are still working to find the link between fractures and increased mortality rates but have not yet found a concrete answer.

“While hip fractures are regarded as significant and recognized as causing increased mortality, non-hip fractures are often seen as not being very important. This study highlights the need for early intervention following any low-trauma fracture to minimize the wide treatment gap that is present internationally,” senior study author Jacqueline Center told Reuters Health in a prepared statement.

Protecting yourself from broken bones

Whether you are part of the elderly population or not, there are ways to prevent falls and broken bones.

What to do if you break a bone

Taking precautions can go a long way in avoiding broken bones. However, several factors go into suffering broken bones that cannot be prevented. You should work to prevent fractures as much as possible, but when you do suffer a broken bone, there are some steps to keep in mind:

Did you or a loved one suffer from a broken bone? The Mississippi personal injury attorneys at Merkel & Cocke, P.A. want to help. Please call 662-627-9641 or fill out our contact form to schedule a free consultation today. We operate offices in Jackson, Clarksdale, Greenville, and Oxford.