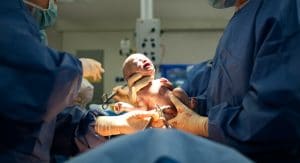 No parent wants to see their brand new infant suffer, and certainly not from a major birth complication. And while birth injuries have vastly declined in the past few decades, the statistics are still significant and can be quite scary. Bringing a new human into the world comes with risks, and there are a number of ways childbirth can inflict injury on a newborn. Of all the possible complications with childbirth however, the most common sustained injuries are head injuries.

How have birth injuries changed over time?

Birth injuries are most often due to natural forces of labor, according to the medical professionals at Merck Manual. The positioning of the fetus just before birth can be a crucial factor when it comes to a smooth and healthy delivery. When the baby is frontward facing, breech, or a sideways variation, the normal ergonomics of labor are put to the test, and sometimes with unfortunate consequences for the child.

In the past, the risk of cesarean delivery was much higher. This encouraged doctors to utilize forceps, which is a surgical instrument meant to fit around a fetus’s head to help pull them out of the birth canal. Unfortunately, this practice proved to be a dangerous way to force the fetus down from high within the birth canal and led to various birth related injuries. Today, the use of forceps is much more limited, and increased cesarean deliveries have allowed for less birth injuries in many circumstances. Updated practices, improved prenatal ultrasonography, and more accurate assessment instruments allow doctors to create safer plans for delivery on an individual basis.

Why are head injuries the most common birth injury?

However, the fact still remains that head injuries are the most common injury resulting from labor and delivery. Why is that? The head of an infant is extremely fragile, even once developed and carried full term in the womb. A baby’s skull bones are still quite malleable, which is actually helpful, as the head is the first to part to enter the birth canal.

Head molding, or the normal change in shape of a baby’s head from pressure during delivery, itself is not an injury and usually naturally remedies itself over several days. A child’s skull will begin to harden over the coming weeks and months. But what happens when something more serious happens to the infant head during labor?

The softness of the skull that makes the head easier to deliver is also what puts it at risk of injury. Having a soft skull puts infants at risk due to prolonged physical pressure on the head. This can lead to brain damage through direct physical pressure. Other brain injuries stem from lack of oxygen to the brain, infections, infant jaundice, abnormal use of birthing instruments, and other medical malpractice.

What are the most frequent types of head injuries?

There are a number of possible head injuries that infants may experience during labor and delivery. With varying levels of severity and permanency, the effects in some cases can be life-altering for baby and family.

Why you want an experienced birth injury attorney on your side

When it comes to your child, you want nothing but the best for their future and their dignity. If you believe your newborn suffered injuries at the hands of medical professionals due to negligence or malpractice, do not hesitate to seek justice on their behalf. Hospital legal defense teams can be rightfully intimidating. As large institutions with thousands of births every year, their goal is to mitigate legal setbacks. With the right team of dedicated legal counsel on your side, you will be able to confidently bring your child’s case to the forefront and demand justice for any wrongdoing.

If your newborn sustained head injuries from a medical professional’s negligence, contact Merkel & Cocke, PA today. Our experienced attorneys passionately provide families with the strong legal counsel necessary to bring justice to Mississippi birth injury victims. We even employ a full-time RN as part of our staff to help assist in representing medical malpractice cases. We serve clients throughout the state, including Clarksdale, Greenville, Tupelo, Jackson, Oxford, and across the Gulf Coast region. Call us today to schedule a free consultation at 662-627-9641  or complete our contact form.