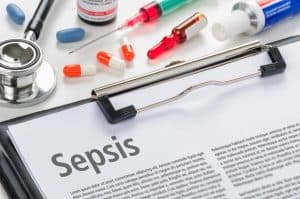 Many people consider hospitals and major medical centers breeding grounds for infections; a place where superbugs flourish just waiting to claim their victims. In particular, medical treatment requiring invasive surgery can enhance the risk of infection to patients. On the other hand, our homes and workplaces are generally supposed to be free from this type of acute health danger.

One particular type of hospital acquired infection that is highly dangerous and life-threatening is sepsis. According to the Centers for Disease Control and Prevention (CDC), every day 4 percent of hospital patients carry at least one healthcare associated infection (HAI).

However, as the below example proves, sepsis may be acquired in the comfort of your own home or at work.

Luke Hannemann is the father of two children and lives in Southport, United Kingdom. He, like many other people, practiced biting his nails on occasion. On one of these occasions he bit off a little too much and tore the skin down the side of his one fingernail.

He didn’t give the incident much thought until some unpleasant symptoms began to manifest and grow worse. Initially he experienced flu-like symptoms that soon developed into a fever, cold sweats, and chills. His finger also swelled up with a throbbing pain which made it difficult for him to focus on his work. At the time, however, he simply thought he had a viral infection that his body was fighting off. He continued going to work that week.

He decided to stay home and rest on a Friday, sleeping all the way until 2 PM the next day. His mother, recognizing the seriousness of his condition, called the National Health Service hotline, which informed them he needed to go to the hospital.

Hannemann spent four days in the hospital receiving intravenous antibiotics to treat the condition of sepsis he had developed. The man recovered from the condition and the doctors informed him he was fortunate to be alive.

The acute danger of sepsis and the need for immediate treatment

Sepsis can lead to organ failure, and in more severe cases septic shock. This occurs when there is a sudden drop in blood pressure which can cause more than one organ to stop working. This form of sepsis can bring about death quickly.

According to the U.S. National Institutes of Health (NIH), sepsis occurs when the body’s immune system overreacts to an infection, such as UTI, infected skin wound, or pneumonia. Viruses, fungi, and bacteria can all cause sepsis – bacteria are the most frequent cause.

During sepsis, the body’s immune system floods the bloodstream with chemicals in order to fight off the infection. However, these chemicals lead to inflammation throughout the body that can lead to leaking blood vessels and blood clots. As a result, the person’s blood flow is impaired which can starve the organs of the oxygen they need to function properly.

However, acting quickly is the key to treating sepsis effectively. Individuals with sepsis are given antibiotics, and sometimes IV fluids and oxygen to promote blood flow to the organs. Other patients require surgery to remove an infected area of tissue, breathing machines, and sometimes kidney dialysis that assists the kidneys with filtering out waste products from the bloodstream. If you present with signs of sepsis at a hospital, and they fail to diagnose you properly, your treatment could be delayed, and the effects can be quite serious.

If you developed an infection that was left untreated, and you sustained injuries as a result, we want to help. The medical malpractice attorneys of Merkel & Cocke, P.A. are ready to fight for you. To schedule an appointment at one of our offices in Jackson, Clarksdale or Oxford, call us now at 662-627-9641 or use our contact form.